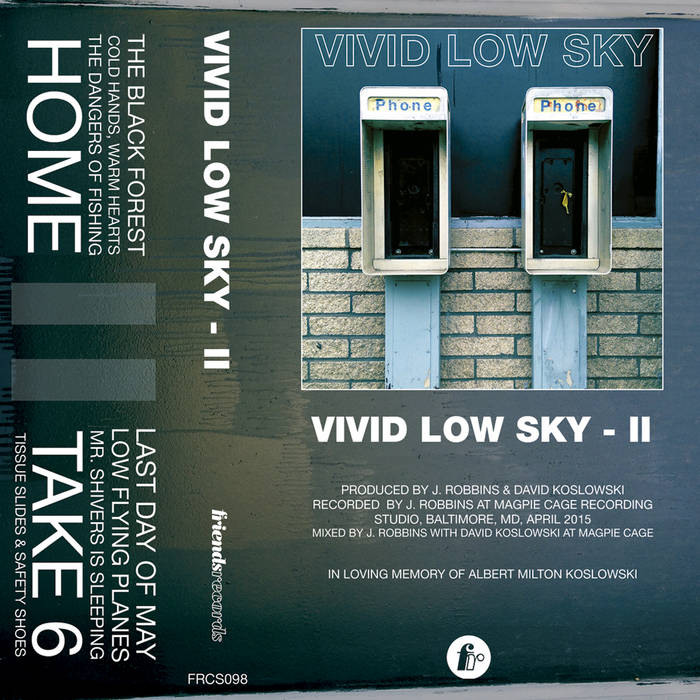 Slimstyle Records released this album on vinyl on 3/11/2016. There are copies available at the following link at a really nice price! www.juno.co.uk/artists/Vivid+Low+Sky/

Huge thanks to Slimstyle Records for allowing us to stream this record to you. And giant hugs to David and Shirlè. I love working with you guys. I love your passion for music. Your fire. It keeps burning so bright. I am both proud and humbled by you.

Vivid Low Sky is back with their long-awaited follow-up, simply entitled II. Culminated from songs Koslowski has written over the years, the music became his therapy, while battling depression to the point of suicidal thoughts, almost losing his eyesight due to a detached retina, the death of his wife’s (Shirlé) parents and most recently his own father’s death. This is reflected in II with its sense of growth as both an individual and a musician. The songs are both expansive and freeing at the same time introspective. The post-punk of “Cold Hands, Warm Heart” evokes the struggle of his father’s battle with a terminal disease, while the Eno-esque “Home” provides a sense of reflection and the comfort of being back in Baltimore.

For the recording, the band met at David & Shirlé’s house in Hampden, a Baltimore neighborhood, for an exhausting six-hour rehearsal, entering the studio the next day. Recorded with producer J. Robbins at his Magpie Cage Studio, in just two days, the foursome created what would becomethe foundation for II. Koslowski even tossed the group a couple brand new ideas that were left to chance and improvisation. Afterwards, J and David mixed the record both adding some additional guitars. The result of II is a subtly seductive, beautifully chaotic and gorgeously cinematic LP.